There has been a flurry of discussion lately within the WordPress community as 200+ themes were removed from the WordPress Themes Directory. Had Matt Mullenweg and the other parties involved in this action done a better job of disclosing the details of how / why this was being done in advance, I doubt as much controversy would have been stirred up. The bulk of the issues relate to the fact that WordPress is a General Public License (GPL) software and many people have conflicting interpretations / points of view about how one can or cannot make a viable business within that intellectual property landscape.

In order to shed some light on the details involved in the situation, Matt spent over two hours yesterday on a special edition of WordPress Weekly to answer any and all questions put forth by the community. If you have the time to listen to it the entire conversation it is worthwhile (accessible in the embedded audio player to the right). A good deal of the discussion could be applied to any open-soure project.

I started to transcribe a few of the questions / responses that I felt were noteworthy and ended up with 4+ pages of notes. Rather than create a Neal Stephenson-esque post, I’m going to break it down into several pieces over posts in the days ahead.

Do you get what you pay for?

The question was asked, “Have premium themes furthered the development of themes as a whole?” and Matt made note of the fact that premium implies it is inherrently better than the alternatives. This is not necessarily the case, especially over the long-term. When you begin to look at the restrictions that are written into most of these purchase agreements, they restrict what you can / cannot do with the theme you purchased. His preference would be to use the term proprietary themes as it is a more accurate representation of the non-GPL licensing restrictions. The GPL always has been about protecting the freedoms of end users, not preventing developers from making a profit. Matt quoted the four fundamental guidelines in context of this conversation: 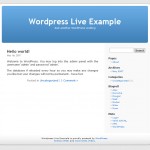 The third and fourth elements are particularily damaging given the themes are derivitive works from WordPress. The litmus test for this is to ask whether something will run without the original work and a theme would certainly not display the content from a database without all of the WordPress functions. Matt drew on the contrasting examples from a developer perspective of the “premium magazine themes” versus Kubrick which is the default theme for WordPress installations.

If I want to build on top of a cool magazine theme is, I have to basically start from scratch and in fact be very careful not to be too close to what I’m trying to emulate. Compare that to some of the free themes that have rocked the WordPress world in their time. Including the one we all know and love now, Kubrick. Instantly on top of Kubrick there are a bunch of things that people just start copying and pasting the code and tweak it and make it better. You have this really fast innovation.

I don’t know if any of you guys remember the very first Kubrick versus what we eventually put into WordPress; it changed significantly. What happend was an open source community developed around it and started tweaking the design, the code, everything like that. I think that is sort of a good example, and there have been many others since then, of where you really get the benefits of open source. Both in the quality, the users and the developers benefit because the developers get people helping him out making it easier and better. The users get this rapid innovation and a lot of themes based around the things they like.

What I believe has been missed in the current controversy surrounding theme removal from the WordPress.org site is that these actions were all taken with the same overall guideline in order to stay true to the root concept / philosophy of open-source that WordPress came from. Everyone is free to do what they want with the software, including creating a fork version of their own if they truly disagree that the approach Automattic has taken the platform. Just the same way as they would be able to compete with WordPress.com by launching their own WordPress MU installation. All Matt has suggested is that, “Ultimately it’s about freedom. Not talking about whether it is illegal or not to do these things. All I’m talking about is WordPress.org, the site we run and host, do we want this stuff in there and that’s all I’ll really speak of authoritatively.”

In the coming days I intend to take this discussion towards more extended concepts surrounding WordPress including: